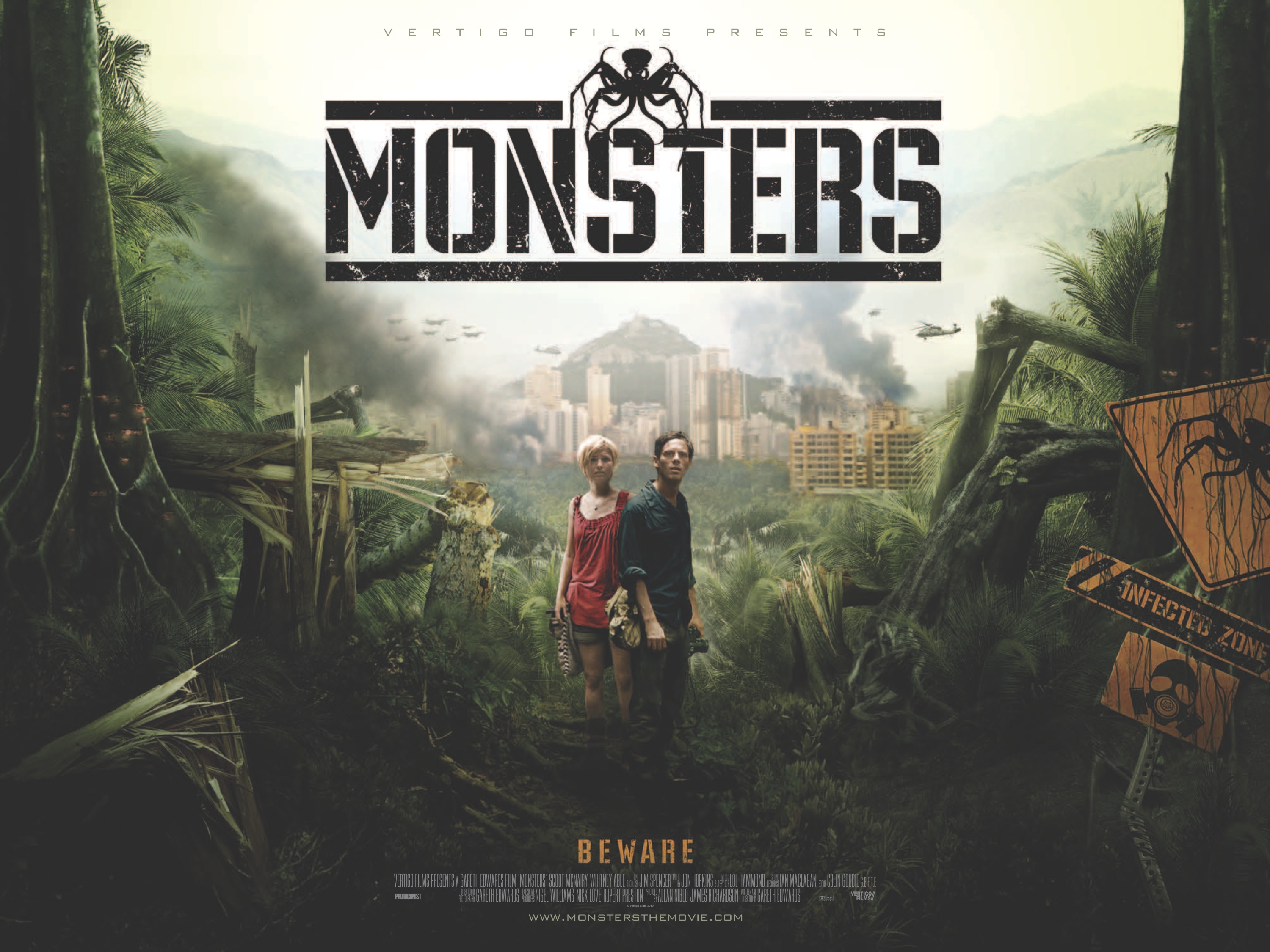 Last night, I finally got around to watching Monsters, Gareth Edward’s applauded low-budget SF flick of last year. It was worth the wait. I absolutely loved this strange, genre-bending movie and here’s why:

1. South America
For those who don’t know, the high concept of Monsters is that Mexico has become ‘infected’ by alien lifeforms that are slowly spreading across South America. These aren’t Independence Day-type nasties; they are just animals who, with no real predators, find themselves on the top of our food chain and are positively flourishing. The film follows a cynical war photographer as he tries to get his boss’s daughter across the quarantined area and back to the huge wall that the USA has constructed to keep the critters out. It’s always a cliché to say that the location is a film’s true star, but in this case it’s true. From verdant rain forests and ancient ruins to dusty, dirty cities and tequila joints, the setting is as compelling as any computer-generated alien.

2. The organic movie-making
Edwards headed to Mexico with two paid actors, a HD camera, some 35mm lenses, a sound engineer and an editor. He came back with a movie. This is Guerilla movie making at its best. Edward’s mini-crew would drive along in their old white van with an approximation of a script – actually just a series of paragraphs explaining what happens in every scene – in hand. If they spotted an interesting location, they’d jump out and improvise the scene. It was a real hand to mouth affair. If someone walked across the back of the scene, one of the crew would have to run after them to sign a release form and Edwards made sure he was always wearing a flourescent vest at all times. Apparently, if you wear a flourescent vest, people assume that you’re official and allowed to be there. That’s something to remember.

The on-the-fly cinematography and the ad-libbed dialogue manages to avoid just about every SF and horror cliché in the book (we can forgive Edwards for the War of the Worlds-inspired creeping tentacle as he manages to give it a real twist – the cliché that is, not the tentacle). The result is a feeling that you’re eavesdropping on real conversations happening in a very real world.

3. The ‘real’ cast
Monsters only has two paid actors, namely the leads, Whitney Able and Scoot McNairy. Everyone else in the film is a member of the public that Edwards and co met on the road. Again, this only helps the quasi-realistic feel and, surprisingly there’s hardly a bum performance among them. In fact, the chap who plays the ferry manager – in reality someone the crew encountered behind the counter of a cafe – is a real scene-stealer. Someone make the man a star.

And a little bit of trivia for you: If you see anyone with a gun in the daytime, they’re the bodyguards the Mexican government provided for free to ensure that the filmmakers didn’t get kidnapped.

4. The monsters themselves
The inspiration for the aliens comes from a planned NASA mission to Europa to take samples of the water beneath the seas of ice that cover the planet. Edward asked what would happen if the probe crashed on its returned to Earth and the alien creatures began to multiply in our waters. The resulting creatures, so brilliantly realised in home-grown CG, are all based on our own deep-sea life – octopuses, crabs, jellyfish – and are therefore truly alien..

5. The fact that it’s not really a monster movie at all…
… it’s a character-study about two people struggling to get home in a world that just happens to include monsters. The fact that there are aliens in the background actually doesn’t matter. What you care about are these two flawed, rather down-beat characters desperately trying to get home in a strange, out-of-kilter reality where aliens exist and humanity just has to get on with it. The low-budget, indy sensibility and the improvised, naturalistic dialogue cements this and when the aliens are finally revealed in their eerily beautiful glory, our heroes very human reaction is profoundly moving.

After watching this, it will be very interesting to see what Edwards is going to do with a traditional monster movie – he’s directing the upcoming Godzilla reboot…