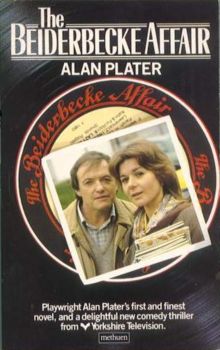 It’s a TV series and a book and his music, apparently, sounded like bullets shot from a bell. How do I know? Trevor Chaplin told me, back in 1985.

The Beiderbecke Affair began life as a TV Series written by Alan Plater, each episode quirkily titled after the first line of dialogue in each one. A novel (‘his first and finest’) quickly followed it, spawning two more books on which the series The Beiderbecke Tapes and The Beiderbecke Connection were based. Despite the fact that he was one of the colossuses of British TV drama, this was the first time I’d noticed Alan Plater’s name, even though I’d probably seen things by him before.

The Beiderbecke Affair is a love letter to Raymond Chandler and jazz. It deals with all the tropes of hard-boiled detective fiction, the platinum blonde dame, the reluctant gumshoe, bent cops, corrupt councillors, a would-be supergrass, shady underworld figures, and Cubs’ football teams. However, Plater shone a grey, overcast Yorkshire light on the murky world of Phillip Marlow and transplanted it to Leeds. Leeds is not LA by any stretch of the imagination (sorry, Leeds) and while there maybe the odd mean street, there are no guns, no murders and no car chases in Plater’s story of reluctant detectives. Well, that’s not strictly true. There is a very sedate car chase featuring a yellow ex-GPO van and a level crossing.

The most unlikely detectives, Plater’s main characters are a couple of comprehensive school teachers. An odd couple, as even they would admit, Trevor Chaplin is a woodwork teacher, content with his lot, and his partner, Jill Swinburne, is a headstrong member of the English Department and Conservation candidate in the local by-election.

Trevor Chaplin’s world is, if not shattered, then severely dented when he buys a set of records by Bix Beiderbecke (Cornet player. The first great white jazz musician. Born Davenport, Iowa March 1903. Drank himself to death, August 1931. They said his playing sounded like bullets shot from a bell. See? Told you.) He ordered them from a beautiful platinum blonde selling door–to-door from a mail order catalogue in aid of the Cub’s football team and the wrong records turn up. It’s a classic, if understated, inciting incident, and everything else follows on from that in a story that twists and turns with a wry humour.

The good-natured banter between Trevor and Jill owes a lot to Plater’s love of the screwball mysteries of the Thin Man movies starring William Powell and Myrna Loy. Plater is a master of his craft and it shows. With an economy of words that looks effortless, he defines Trevor and Jill’s characters and pithily illustrates their comfortable long-term relationship before they rush headlong, well I say rush, it’s more of an amiable dawdle, into adventure. The book revolves around the relationship between the two main characters and Plater’s love for them shines through. The dialogue sparkles with laconic Northern humour and it’s a genuine pleasure to spend time with them. Even today, though the world has moved on from long-playing records and telephone boxes to on-line shopping, mp3 downloads and mobile phones, the characters themselves have a timeless ring of truth.

The second book in the No Man’s Land series, The Ironclad Prophecy by Pat Kelleher is published by Abaddon Books later this month. Pat has written for magazines, animation and radio. He served his time writing for a wide variety of TV licensed characters, translating them into audio books, novels and comics. He has several non-fiction books to his credit and his educational strips and stories for the RSPB currently form the mainstays of their Youth publications.

Somehow he has steadfastly managed to avoid all those careers and part-time jobs that look so good on a dust jacket.