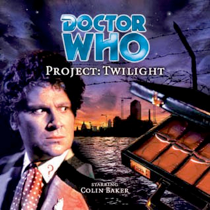 Yesterday was the tenth anniversary of Doctor Who – Project: Twilight being recorded, back on the 23rd and 24th June 2001.

I can remember the recording so well. I wasn’t able to get to the first day as I was at a wedding, but shot up the M4 on the Sunday with my heart in my mouth. I’d been receiving reports from my co-writer all day on the Saturday, but my stomach was churning with excitement and nerves. In a few short hours I would be meeting Colin Baker, the Doctor I had watched sitting in my Grandma’s lounge on Saturday afternoons. What’s more, he would be saying the words that Mark and I had written. I couldn’t get my head around that. I just wished that Grandma had been around to see it. She’d watched Doctor Who for years and was probably responsible for my love of the series.

Mark greeted me as I arrived at Moat Studios in Brixton and took me in. There in the green room was the glorious Maggie Stables, who played sexagenarian companion Evelyn Smythe and Rosie Cavaliero, a young actress who I recognised from Cold Feet and would have a glittering future on British TV.

And there was Colin, sitting reading the paper. He looked up and smiled as I walked in, put down his paper and rose from his seat. “Hello there,” he said, strolling over to me and offering me his hand, “I’m Colin.” I fought the urge to say, “I know!”

It was one of the best days of my life. Colin was charming and oh so kind about the script, telling Mark and I that he thought everyone would be seeing a lot more of us in future. Back then, I didn’t dare imagine that a decade later we would still be writing together and would have had such amazing opportunities, both in our continuing partnership and also as solo writers: The Tomorrow People, Judge Dredd, Iris Wildthyme and The Sarah Jane Adventures. And there’s more to come, with a few special projects being announced in the next few months, both with Big Finish and beyond.

I’m always going to be grateful to Gary Russell for that break he gave us ten years ago.

There is something else about the Project: Twilight recording that Mark is always quick to remind me. After I had arrived in studio, Gary bundled me into a recording booth and told me that he wanted me to record the newsreader’s lines. I wasn’t prepared for this and have to admit went a little to pieces, nerves getting the best of me. I didn’t even put the headphones on so I could hear Gary in the director’s booth, leading to much arm waving and eye rolling.

I was dreadful. I stumbled through my lines, fluffing this and stuttering that. After three takes I was released from the booth and grabbed a coffee to calm myself.

Months later, when I’d received the text disc, I cringed when I got to the point when the newsreader piped up, waiting to hear how dreadful I sounded.

But I didn’t sound dreadful. I sounded like Gary Russell.

I’d been overdubbed in an audio play bit-part! I really had been that bad!

Ah well, never mind. I won’t give up the day job to tread the boards just yet!