Today the Cavblog introduces a new guest blog spot. Every Wednesday I’ll welcome a fellow writer or blogger to reveal the one book that they’ve always wished they’d written. First up is horror author Wayne Simmons… 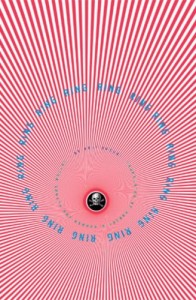 When I was writing my debut novel, Drop Dead Gorgeous, I was watching a lot of Asian cinema. In fact, in many ways DDG is a hybrid of influences, the two major landmarks being the film-making of George A Romero and films like Ringu, Tale of Two Sisters and Dark Water. But the character to resonate most with me around that time was Sadako…

Sadako is the antagonist within Koji Suzuki’s novels, Ringu, Spiral and Loop (all of which I’ve devoured). However, I must admit to seeing her first in Hideo Nakata’s mesmerising Ringu film. Released in Japan, simultaneously with its less popular (and later replaced) sequel Spiral , it didn’t take long for the Ringu film adaptation to become a world phenomenon, spawning a series of sequels and remakes that spread like wildfire throughout the Asian world. Sadako found herself trapped in a radio, as well as TV series, before finding worldwide cult status in Nakato’s classic movie. But it was that scene, of course, the crescendo twist finding Ryuji Takayama frozen with fear as ghoul-like Sadako, face ever masked by hair, crawls her way through the TV. That scene alone secured the film’s future as a modern cult classic.

Bizarrely, this trademark scene is all Nakato’s work. Suzuki’s Sadako was a much more subtle (but equally deadly) menace. Previous tellings of the story had the same formula (girlie-ghost spreads her message of doom through a copyright-free video tape that seals viewers with a curse for which no remedy seems to exist) but no ‘TV-People’ fun from Sadako. And that wasn’t all that Nakato changed. Suzuki’s original cursed twosome, Kazuyuki Asakawa and his amoral, yet enigmatic, friend, Ryuji Takayama are mixed into a husband and ex-wife team in order to streamline the cast and insert that all-too-important sexual tension. Ryuji is given a more cinema-friendly personality (later revoked a little by his less noble portrayal in Korea’s The Ring Virus) and Asakawa becomes a woman. Sadako’s story changes considerably as well. By the time she reaches the American remake, the poor dear has a completely different name (helpfully beginning with ‘S’) and the squeaky voice of a ten year old.

Suzuki’s Sadako, however, is proud of her complexity. Her story is one of sorrow, soiled by a childhood fraught with rejection and seclusion. Her family find themselves used and abused by their fellow islanders due to an uncanny psychic gift that mother and daughter share. Their no-good-mojo ends them in all manner of tears as a press conference focusing on the family’s gift devolves into a good, old-fashioned witch hunt. But that’s where the novel’s similarities to big screen portrayals end. Sadako’s literary life is further complicated by an unfortunate cocktail (excuse the pun) of mesmerising beauty and a merry old donger between her legs. Not ideal for any girl, of course, and ultimately the straw to break the camel’s back for this one. Sadako finally seals her own fate by hypnotising the family doctor, in order to be raped, killed and thrown down a well in that order.

There’s something about this melancholic tale that resonates with me, even now. From Suzuki’s excellent series of novels, to Nakato’s achingly beautiful dark romance of Ring 0, I love the eerie menace of Sadako, happily citing that-TV-Set in Ringu as the first film scene since the fat bloke getting eaten in Piranha (I was young at the time! honest) to actually have me losing sleep!

Most of all, I love Sadako for what she truly is, the anti-hero of every god-forsaken one of us who has felt even just a tinge of what it’s like to be the outsider, that person who looks, thinks or smells different. And that is a very prevalent theme within Drop Dead Gorgeous. 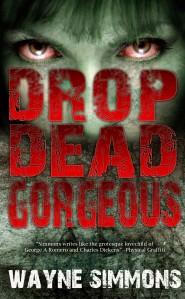 Belfast born Wayne Simmons has been loitering with intent around the horror genre for some years. Having scribbled reviews and interviews for various zines, Wayne released his debut horror novel, Drop Dead Gorgeous, through Permuted Press. The book was received well by both fans of the genre and reviewers alike.

In Feb 2011, an extended version of DDG will be released through Snowbooks.

In what little spare time he has left, Wayne enjoys running, getting tattooed and listening to all manner of unseemly screeches on his BOOM-BOOM Box…