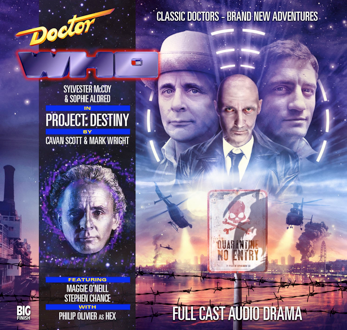 It’s been a while since I’ve update my news blog but lots has been going on.

First up, Doctor Who – Project: Destiny, the long-awaited sequel to Project: Twilight and Project: Lazarus is out, once again co-written with my partner-in-crime, Mark Wright. You can buy Project: Destiny here. Recently Big Finish have been providing a second version of every cover on the flip-side of the CD insert, each featuring the logo and typeface that was used in the featured Doctor’s era. The fan-boy in me can’t help but jump up and down in glee with the alternate version of Destiny’s fantastic cover (right). OK, so the McCoy era logo may not have aged particularly well, but it still reminds me of cold, Wednesday evenings, rushing home to catch the next episode of Remembrance of the Daleks or Ghostlight. It’s a bit of a thrill to see my name presented like that even after all these years…

Connected to Project: Destiny Mark and I were interviewed in Doctor Who Magazine issue 426.

A bizarre journal leads to terror for Sarah Jane and friends, in this exclusive audio story read by Elisabeth Sladen. Rani is delighted to hear that her favourite author, Gregory P. Wilkinson, is doing a signing at a local bookshop. When he agrees to be interviewed for the school newspaper, she is even more thrilled. And when the old man presents her with his journal, full of notes and sketches from his ‘Wraith World’ books, her happiness is complete. But all too soon her elation turns to horror, as the worlds of fiction and reality collide. Can Sarah Jane save Rani, Clyde and Luke from a creature beyond their wildest nightmares? Elisabeth Sladen, who stars as Sarah Jane in the CBBC TV series, reads this exclusive audio story by Cavan Scott and Mark Wright. The cover photograph shows Elisabeth Sladen as Sarah Jane with Anjli Mohindra as Rani, Tommy Knight as Luke, and Daniel Anthony as Clyde.

Last, and by no means least, The Obverse Book of Ghosts is also weeks away from being published, edited by yours truly. I’m really proud of this collection, featuring stories from:

There’s an interview with me about the collection over on the Obverse Books site.

Phew! That’s a lot of news, and more to come…