The first Doctor Who comic strip I ever read was Voyager by Steve Parkhouse which ran in issues 90 – 94 of Doctor Who Monthly in 1984. That story affected me in two ways. First of all, I from the moment I read the first issue I was doomed to become a Doctor Who fan – to fill my bedroom with all kind of Gallifreyan tat and my brain with oodles of time-travel trivia. Nothing has changed there then (although my wife has quite rightly banned Dalek action figures from the bedroom!)

The second effect was that from that day I vowed that I would write my own Doctor Who comic strip. Over the years I scribbled countless ideas in notebooks and sent in awful submission after awful submission to the magazine. Somewhere here I still have at least one of the rejection letters. It was for a story called Zenith of the Daleks which featured – you guessed it – the Daleks and the Destroyer from the 1989 TV story Battlefield. If I remember rightly, the Time Lords had captured the Destroyer and imprisoned him at the heart of a planet that the Daleks were now mining. At the time I thought it was epic, thrilling and edgy. If I had been the editor, I would have rejected it.

It’s only taken 25 years for my dream to come true. Today, issue 115 of Doctor Who Adventures hits the newsstands features Creature Feature, a four-page comic strip with words by me and art by the wonderful John Ross and Alan Craddock. My inner 11-year old self will be punching the air! 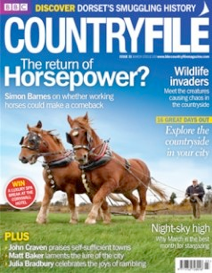 In complete contrast, the latest issue of Countryfile Magazine is also out now featuring three features from yours truly. First up there’s my round-up of Britain’s finest farm shops, followed by an Inspector Morse inspired walk in the outskirts of Oxford and last, but by no means least, the story of a semi-clothed spectre.