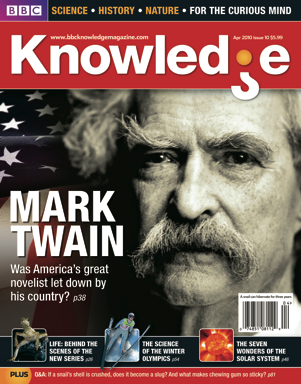 The latest issue of BBC Knowledge is out now, my first as Acting Managing Editor, a post I have taken on a freelance basis for the next six months or so. The magazine is only available in North America and Canada as uses material from Britain’s own BBC History, BBC Focus and BBC Wildlife magazines.

This isn’t just a cut and paste job. Every issue we rework each feature for the American market, commissioning new material to supplement and target the content for the magazine’s ever-growing readership.

I’ve particularly enjoyed getting back to science and technology journalism after a few good years out of the field. Although the hard physics of the science of the winter olympics feature did cause my brain to ache a little for a few days.

Talking of science, the latest issue of Focus – out later this week – includes a review by yours truly of ‘The Astronaut’s Cookbook’, a fascinating account of the difficulties of getting food into orbit on space missions over the years. I’ve always dreamt of heading into space, but I don’t fancy the grub much!