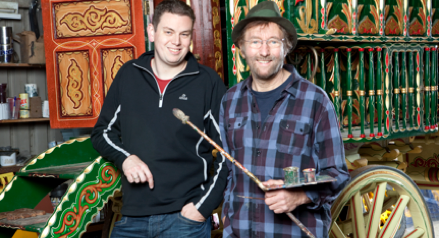 I’ve been busy beavering away all over Christmas on an exciting new project (more on that later), so almost forgot to point out that the January issue of Countryfile Magazine, my last as editor, is now out. Within its pages you’ll find my interview with Dave Peacock, one half of ‘Rockney’ group Chas ‘n’ Dave. I spend a fantastic day with Dave back in October when he shared his love of painting gypsy wagons. Now that he’s pretty much hung up his bass and knocked touring on the head, Dave has more time to return to his roots – the carving and letter work he learnt as an apprentice out of school.

The picture above is taken in his workshop, in front of the beautifully decorated wagon he has restored over the last 15 years. A little fact for you: those green cages behind Dave’s shoulder were where the chickens would have clucked and fussed as the travelling-folk rolled along the country lanes.